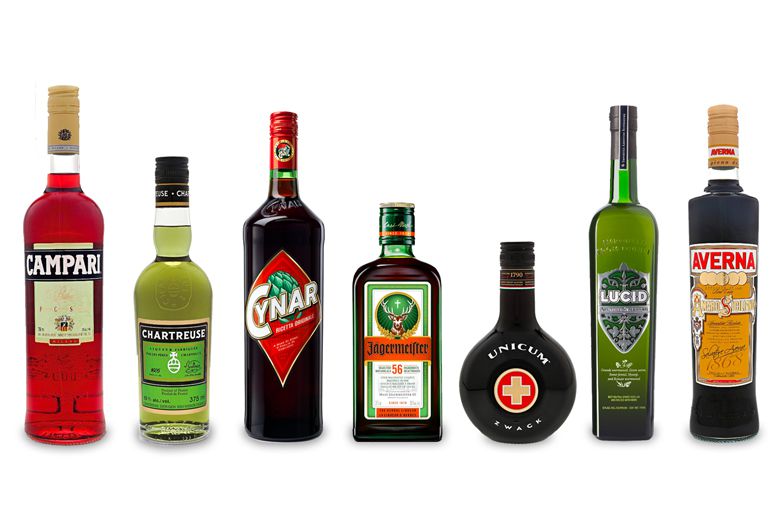 Bitter Herbs – The benefits of digestive bitters in food, drink, and medicine

Bars and restaurants resemble an apothecary with their shelves lined with herb infused liquors. Most people are unaware of the medicinal properties these herbal extracts possess. And few people will venture to taste them because of their “offensive” bitter taste.  Yet, for thousands of years, people have consumed bitter herbs to increase appetite, stimulate digestion and treat an array of digestive disorders.

Humans have an innate aversion to bitter food and prefer to stimulate their sweet taste buds. In response, the agriculture industry breeds fruits and vegetables to remove these undesirable compounds while the food industry adds sugar to everything to seduce us to buy their products.  Consequently, the modern diet stimulates our sweet taste buds and greatly neglects our bitter taste buds.  Is it no coincidence that there’s a rise in prevalence digestive conditions, like indigestion and heartburn as bitter foods are being phased out of our diets? This article provides some background on bitter herbs and discusses some examples of those that have shaped our culture and medicine.  Learn to love the bitter things in life!

Bitter plants have played an important role in the evolution of the human diet. Many plants contain poisonous substances that we must avoid to stay alive. Our bitter taste buds have evolved to detect these toxins to avoid poisoning,1  thus over stimulating bitter taste buds can induce nausea.2   But there are degrees of bitterness. Most edible wild plants have some bitter qualities to them and humans have consumed them daily since the beginning of time.  Furthermore, not all bitter compounds are poisonous and many possess important antioxidant, anticancer and anti-inflammatory properties.

Because bitters are ubiquitous in wild plants, our digestive tract evolved to recognize them as a cue for meal time. Research shows that bitter taste buds stimulate the release of cholecystokinin (CCK)3, a hormone that controls the release of pancreatic enzymes and bile that are both essential for digestion.  So our taste buds probably know that a little bitter is good but too much is bad.

How do bitter herbs work?

In herbal medicine bitter herbs have numerous medical actions associated with them including:

What conditions can bitter herbs help with?

Because bitter herbs stimulate the release of digestive enzymes they can be used with many diseases associated with an impaired digestion:

What are some examples of bitter herbs used in food and drink?

There are hundreds of bitter herbs used as food, drink, and medicine. The following list is just a handful of plants that have played an important role in western culture.

Gentian (Gentian lutea) is a tall alpine flower that is perhaps the most bitter of herbs. Numerous species of gentians have been used in herbal medicine around the world to treat digestive issues and fight infections. It is a powerful tonic that improves appetite and strengthens digestion. This plant is an essential compound of many cocktails. A few drops of Angostura bitters, which contains predominantly gentian, is an ingredient in hundreds of classic cocktails including Manhattan, Negroni.4 I’ve even seen a Cuban bartender add a couple of drops to the best Mojito I’ve ever consumed. Gentian can also be found in many Italian “amaros” including Campari, Aperol, Averna, Suze, Amaro.4 Research confirms that gentian stimulates bitter receptors on the tongue,5 but this seems pretty obvious. Just put a drop on your tongue and you will agree that is probably the bitterest plant you’ve ever tasted. Research on gentian extract supports the traditional claims that they increase bile production,6 stimulate stomach acid & enzymes and also mucous production.7  Gentian is my favorite bitter herb because supported by both science and tradition.

The medical use of wormwood dates back to the Ancient Egyptians who used it to kill roundworms and treat digestive disorders.  Its traditional choleretic action is supported by research.8  In addition, animal studies demonstrate it protects the liver.8–10 Wormwood contains the bitter compound absinthinin that acts as a digestive stimulant and may possess some antimicrobial effects. In addition, wormwood contains a neurotoxin called thujone. Without Wormwood one of the world’s most infamous liquors, Absinthe, would not exist. Wormwood gives absinthe its bitter qualities and anise and fennel impart the predominant licorice taste and a carminative effect.4 Absinthe rose to popularity in the 19th century when this addictive beverage was consumed by many artists, writers, and poets. Chronic consumption of wormwood causes a syndrome called “absinthism”, which characterized by depression, visual disturbance, tremors, and convulsions. Thujone is responsible for these effects because it blocks the calming effects of the neurotransmitter GABA in the body causing generalized stimulation.11  As a result, the prohibition of Absinthe occurred in many countries. Recently the ban has been lifted in most countries, however, much thujone levels are monitored and kept to a minimum.

Although the toxic effects of wormwood and Absinthe have been exaggerated over the years, this bitter herb should be used with care. Most importantly it should not be given to pregnant women, nursing mothers and people with a history of depression and seizures.

The Chichona tree has long been used as a digestive tonic but became famous because it was one of the first effective treatments for malaria. The indigenous people in South America first used it to treat malaria and it eventually made its way to Europe. Extracts of chinchona bark were used in Italy to treat malaria since the 17th century. Not long after quinine was extracted and became the world’s first anti-malarial drugs and was the drug of choice until the 1940s. During the world wars, British soldiers would often mix the bitter powder with sugar and soda water to make it more palatable. This gave rise to modern day “tonic water.”4 Quinine is so bitter that small amounts can be detected by our taste buds. Tonic water today has too small little quinine to be effective against malaria. But still, tonic water would be a good digestive tonic… if it weren’t for the high-fructose corn syrup.

Garden Angelica has long been used in herbal medicine for digestive and respiratory conditions. It is also used to flavor liqueurs like Chartreuse and Vermouth4 that are commonly used as digestive tonics. Although not as bitter as Gentian, it does have a distinctive bitter taste and also an aromatic quality due to the presence of essential oils.

Note: Garden Angelica looks very similar to poison hemlock and some other toxic plants. Therefore only qualified experts should obtain the plant from the wild. Artichokes are native to the Mediterranean where it is used as both a food, drink, and medicine.  The Italian liquor Cynar is a blend of herbs but gets its predominant taste from artichoke.4  The thistle or flower is steamed and consumed as a flower.  Research shows artichoke is rich in polyphenols giving it antioxidant and anti-inflammatory properties.12  Is has a choleretic effect that helps improve the release of bile.13  Clinical trials have shown it improves indigestion1415, lowers cholesterol, relieves irritable bowel syndrome (IBS),16 gallstones,17 and helps with a variety of liver disease.18 Chicory – Friend of the liver

Chicory is a common weed that can found growing along roadside and fields.  Its use in medicine dates back thousands of years.  Galen, an ancient Greek physician, called chicory the “liver’s best friends”. Common chicory (Cichorium intybus) was used to treat indigestion, gallstones, jaundice, and engorgement of the liver. Roasted chicory has a bitter robust taste and has been used as a coffee substitute during desperate times. From an evolutionary standpoint, humans should consume bitter herbs on a daily basis. Eating a salad rich in endive or drinking some unsweetened cup of chicory or coffee is one way.  Alcohol extracts of herbs are also appropriate.  Although bitter liquors are fine to consume occasionally, the addition of sugar and artificial colors to make them good choices for daily use or as medicine. Therefore herbalists and naturopathic doctors prefer to recommend pure herbal extracts called tinctures in medicine.

All images are copyright of Matt Gowan ©2017